Innovation in Nature – How Shrimp Can Save Lives and Planet 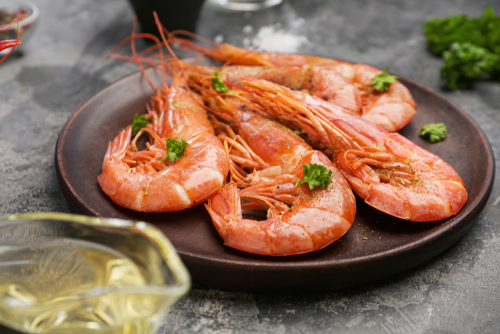 As a futurist and innovation keynote speaker I like to make innovation simple and easily accessible so that anyone can do it. Nothing is more accessible than nature, yet the vastness of what’s possible in innovation through biomimicry, (using nature to solve problems) has barely been tapped into. One example of an innovation in nature that can save lives and the planet is chitosan, a blood-clotting, antimicrobial substance obtained from the hard outer shells of crab, lobster, and shrimp. It is the second most abundant organic material on earth after cellulose. The uses for it are numerous and we’re only beginning to unravel their mysteries.

The leading cause of mortality on the battlefield is hemorrage. Around 40% of trauma-related deaths are due to bleeding as the most common cause of preventable death in trauma. On the battlefield, gauze had commonly been used to pack a wound. But if the bleeding hadn’t stopped within three minutes they would have to take it out and start all over. Not a great solution at all, but the only one they had.

A small group of veterans, scientists and engineers were working on a way to stop bleeding and were inspired by the Fix-a-Flat foam for fixing tires. The theory was that an injectable foam could be used to stop bleeding. This is a great example of taking an idea from one industry and applying it to another.

But it didn’t quite work out the exact way they imagined. The high blood pressure kept washing the foam out. So they switched to using small sponges, which act as a barrier to blood flow and stop the bleeding within twenty seconds. It’s meant to be a temporary solution before getting to a trauma center. But with severe bleeding, that can be enough to buy a patient some time since it will last up to four hours.

The X-Stat syringe is pre-loaded with tiny sponges that are made of cellulose, a plant-based material that doesn’t dissolve into the body, and coated with the blood clotting, antimicrobial chitosan. As soon as the sponges touch liquid they expand. Each syringe can absorb up to a pint of blood and three of them can be used per patient.

Rev MedX, the company that makes X-Stat, was eventually given $5 million by the US Army to develop the product.

If you’ve walked through a health food store you have probably seen another use for chitosan as a weight loss agent. Chitosan binds to fat in the body and reduces the amount of fat your body stores. In 15 clinical trials that tested the affects of chitosan on overweight people, they found that people treated with chitosan appeared to lose significantly more weight and experience changes in cholesterol levels and blood pressure.

Also, research suggests that applying chitosan ascorbate directly to the gums seems to help in the treatment of periodontitis.

The uses for chitosan don’t end there. Only 14% of plastic waste in the world is recycled. But Javier G. Fernandez, a scientist and expert in bioplastics, is looking to change that. He is using the chitosan from shrimp shells to create a biodegradable bioplastic. Mixed with silk, he calls his invention Shrilk.

The bioplastic breaks down in only three weeks, and releases nutrients for plants and the soil, which makes it a natural fertilizer.

Shrilk can be molded in the same way as plastic made from petroleum, making it a natural, sustainable material that the British newspaper The Guardian has called “one of the five materials that could change the world”.

Chitosan is just one example of innovation in nature and how it can save lives and the planet. We need to look to nature more often to solve problems. The answers have been there for billions of years.