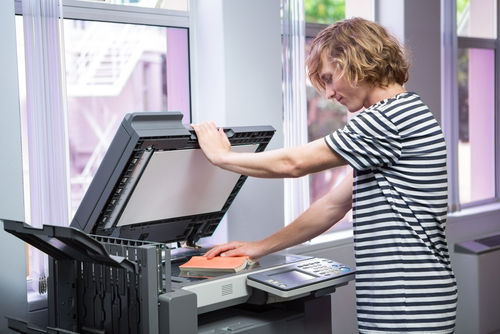 Quite often innovation comes from serendipity. This was the case with Chester Carlson. It’s a great lesson in how innovation will often find you if you are willing to go in a different direction in life.

It was the depths of The Great Depression that sent Carlson’s fate in a different direction. He had just graduated from Cal Tech with a degree in physics, but he couldn’t find a steady job in his field. With the economic downfall getting worse, he had to settle for any kind of job he could get. It turned out to be in the patent department of the Mallory Battery Company.

Wanting to make the most of the opportunity he had been given, he decided to go to law school at night after his day job. When he moved up to manager of the department, he was frustrated that there were never enough copies of the patent documents for everyone who wanted them. He would either have to photograph them or copy them by hand, and neither option was a good one.

In his research to find a better solution he stumbled on to a new technique called photoconductivity. It had recently been discovered by physicist Paul Selenyi. Selenyi discovered that when light hits certain materials, the flow of electrons increases. Carlson set up a makeshift lab to test out some theories he had about this new discovery.

He found that if an image was shown on a photoconductive surface, electrical currents would flow on the lighter areas, but not the dark ones and a copy could be made. He called it electrophotography. Then he pitched his new idea in an effort to get a licensing deal or have someone buy it from him. He had taken it as far as he could on his own. As an inventor I can definitely relate as the research and development phase is very expensive. Taking it beyond that point requires even more money. Carlson pitched his idea to companies like IBM and GE, but they showed no interest at all.

Years later he entered into a joint venture with the Battelle Research Institute to improve on his technique. Years later a manufacturer bought the rights to the patent and changed the name to Xerox. The company became extremely successful and made Carlson a very rich man. He gave away two thirds of his wealth to charity.

I was thrilled to see the Xerox name on my own patented invention, the wrist water bottle, as a promotional product.

An economic downturn creates serendipity and the invention of Xerox is proof.