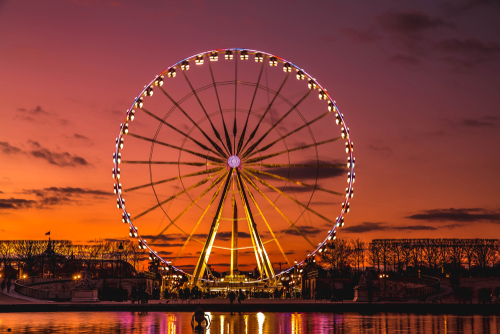 A few months ago while in Orlando as the innovation keynote speaker for the Florida Building Code Conference, I took a day to visit some Orlando sites such as ICON Park. If you go to ICON Park you have to take a ride on The Wheel. It’s a 400 foot tall observation ferris wheel with a stunning view of the city.

We know of these amusement park rides as a ferris wheel, based on the ferris wheel inventor George Ferris. But like many inventions, you can’t say he was the first to come up with the idea. In fact, if you think about it, the idea probably came from the large circular wheels used to pick up water for irrigation. These were invented in 200 B.C. And the first wheels that carried people as a ride were called “pleasure wheels”.

The observation wheels have come a long way since the 17th century “pleasure wheels” in Bulgaria. The ride was hand turned by two strong men, and the passengers rode in chairs suspended from large wooden rings.

In 1848 Antonio Maguino built a wheel ride that was also turned by two strong men. It was made of wood and was used to draw crowds at his rural park in Walton Spring, GA.

Then William Somers, a carpenter, built 50-foot wooden wheels at Asbury Park, Atlantic City and Coney Island. He called it the Roundabout and got a patent on the idea.

Like many inventions, the wheel ride would get bigger and better. This may have come about because of our envy of the Effiel Tower. In the late 1800s, the Columbian Exposition would be on display in Chicago. Architect Daniel Burnham was given the task of making sure the event was a design masterpiece. So he hired a team of designers and gave them some advice. “Make no little plans!” He wanted something novel, original, daring and unique.

One of his steel engineers, George Washington Gale Ferris did some quick impromptu brainstorming. He drew up plans for a huge steel wheel ride with 36 cars that could hold 60 passengers each. Ferris believed in his invention so much that he put up $25,000 of his own money to do safety studies and hire more engineers to work on it.

The first Ferris Wheel had over 100,000 parts, including an 89,320 pound axle. It was a 250 foot structure designed like a bicycle wheel. Over a million people paid 50 cents for a 20 minute ride. The reviews about the new ride were glowing.

But, as I’ve mentioned before in this blog, the invention process just keeps going. Another inventor, William E. Sullivan, took this idea and came up with the idea of making a smaller wheel that could be taken down and moved. He designed a wheel that could be transported and formed a company to manufacture them. Most ferris wheels you see today in fairs are made by his company, the Eli Bridge Company.

I think that the inventor you tend to remember is the one with the best publicist. This was also the case with the Ferris Wheel. Somers sued Ferris for copyright infringement. It came to light in the courtroom that Ferris did indeed steal the idea from Somers after riding his roundabout in Atlantic City. It wasn’t his idea after all. But it’s the Ferris name everyone remembers and not William Somers. Somers won his case, but lost on appeal.

Karma did end up getting the best of George Ferris though. Several financial setbacks occurred and he ended up losing $700,000 during the Great Depression. His marriage collapsed. Then three years later he died of typhoid fever.

To this day, the ferris wheel remains a staple at fairs and amusement parks. The High Roller in Las Vegas currently holds the record for the world’s tallest wheel at 550 feet.