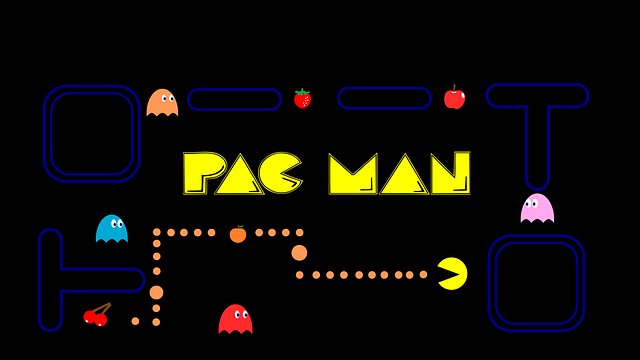 Sometimes inspiration for game design innovation can be found in the oddest of places. Toru Iwatani was sitting at a restaurant eating a pizza when he noticed that the two pieces that were missing resembled a mouth. He had been wanting to come up with a game that women and girls would like. He thought a game about eating would work. Before PacMan most video games were played by males and he wanted his game to reach a much wider audience.

Iwatani also wanted to create a game that didn’t incite violence. Most people would say that PacMan is pretty non-violent, except for a recent study that said it was 62% violent. I don’t think having ghosts chase you is that violent, but what do I know, I’ve never been chased by any.

When Iwatani started working at Namco, the company that produced the game, he originally wanted to work on pinball games and had no training as a designer or programmer.

The way the game works is that players move through a maze with a joystick “eating” colored dots until they’re gone and then you move up to the next level. To make the game more challenging, 4 ghosts chase PacMan and try to “eat” him. The roles are reversed when PacMan eats his special “power pills”. This was inspired by Popeye. Popeye gets stronger when he eats his spinach and is therefore able to defeat his arch enemy Bluto.

The ghosts, Blinky, Pinky, Inky and Clyde were inspired by Casper, the friendly ghost that he saw in a comic book. One of the clever things about the ghosts is that each one behaves differently.

In the beginning, PacMan was called PucMan when it was in Japan, and it did appeal to younger players and women, but seasoned video gamers weren’t that interested. Once it arrived in the U.S. it was introduced to a whole new audience and they loved it. 350,000 machines were sold in a year and a half and the game went on to sell millions. Iwatani didn’t share in the financial success of the game as he was an employee of the company.

PacMan went on to be successful in other areas too. There was a PacMan song, cartoon TV series, and all kinds of merchandising like mugs, T-shirts, door mats, keychains, etc.

PacMan today remains one of the most loved classic video games. There were at least 31 sequels and remakes, and the game is still played around the world.