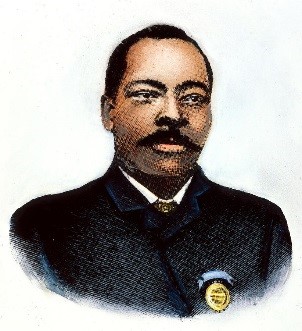 As a self taught inventor myself, I love hearing stories of other inventors who pulled themselves up by their bootstraps and simply figured everything out. Granville T. Woods, also known as the Black Edison, was that kind of person. He literally learned on the job.  He made sure he had the knowledge to not only create his inventions, but bring them to market.

As a kid he had very little schooling, and as soon as he was able to he started working a variety of jobs, including work as a railroad engineer in a railroad machine shop, as an engineer on a British ship, in a steel mill, and as a railroad worker. While doing this, he decided to take courses in electricity and engineering at night school, along with some private tutoring.

His first patent was for an improved steam boiler furnace and later patents were mostly for electrical devices, including his second invention, an improved telephone transmitter. One of his most important inventions was a device that allowed trolley cars to collect electric power from overhead wires.

Granville T. Woods invented more than a dozen devices to improve electric railway cars and much more for controlling the flow of electricity. His most noted invention was a system for letting the engineer of a train know how close his train was to others. This device helped cut down accidents and collisions between trains.

In 1872, Granville T. Woods got a job as a fireman on the Danville and Southern railroad in Missouri, eventually becoming an engineer. He invested his spare time studying electronics. In 1874, he moved to Springfield, Illinois, and worked in a rolling mill. In 1878, he took a job aboard the Ironsides, a British steamer, and, within two years, became Chief Engineer of the steamer. Finally, his travels and experiences led him to settle in Cincinnati, Ohio, where he became the person most responsible for modernizing the railroad.

Patent for an Improved Steam-boiler Furnace

In 1888, Granville T. Woods developed a system for overhead electric conducting lines for railroads, which aided in the development of the overhead railroad system found in cities such as Chicago, St. Louis, and New York City. In his early thirties, he became interested in thermal power and steam-driven engines. And, in 1889, he filed his first patent for an improved steam-boiler furnace.

In 1887, he patented the Synchronous Multiplex Railway Telegraph, which allowed communications between train stations from moving trains. Granville T. Woods’ invention made it possible for trains to communicate with the station and with other trains so they knew exactly where they were at all times.

Invention of the Third Rail

Another important invention he came up with is the basis of the so-called “third rail” currently used by electric-powered transit systems, he also received patents for an improved air-brake system.

Invention of the Safety Dimmer

In 1896, Woods created a safe, economical, and efficient invention for controlling electrical lights in theaters called the safety dimmer.

Granville T. Woods Black Edison and self taught inventor, ended up acquiring 60 patents and in 2006 was inducted into the National Inventors Hall of Fame.