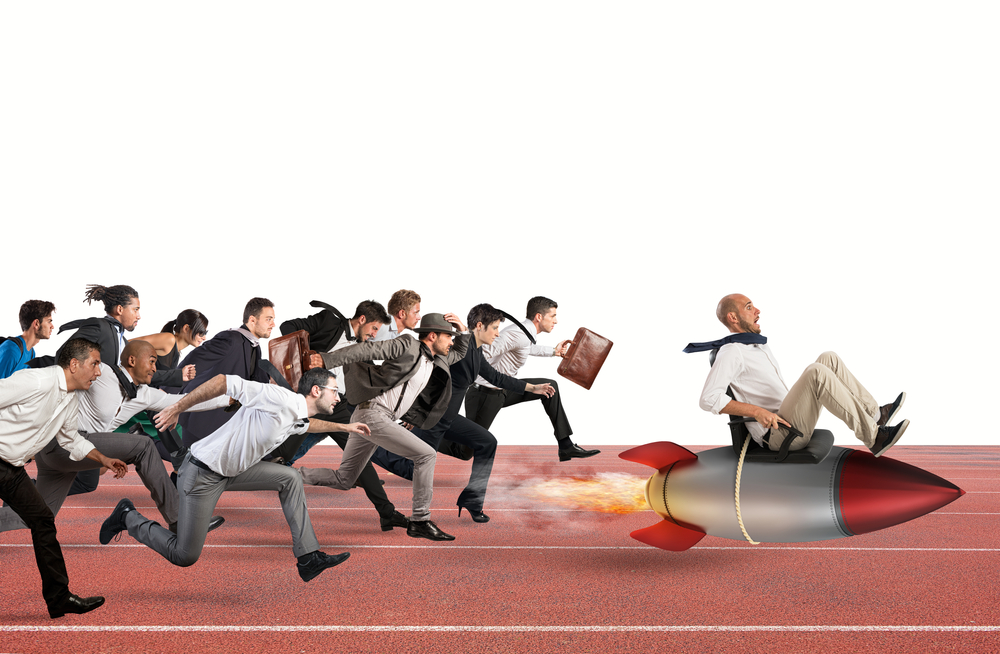 Competitive advantage is what separates you from the rest of the companies and organizations you compete with. It’s the reason people pick you and your business instead of your competition.

A business may have a competitive advantage because they are able to make and sell goods cheaper than others. This is very hard to do unless you have deep pockets like Walmart. Their tagline is “every day low price”. They have been selling quality goods at lower prices for years. Their buying power is something that is hard to compete with unless you have the money and distribution they do. If you’re going to use lower prices as a competitive advantage be prepared to work harder than your competition and go for volume.

Maybe they have a well known brand like Apple. Apple fans will stand in line for hours waiting for their new products. To stand out as a brand you have to have enthusiastic customers who will rave about you to their friends and family and online. This is earned by being loyal to them and giving them what they want. Do nice things for your biggest fans and they will stick with you through thick and thin. Be accessible to them and make a human connection. I always give my customers my direct phone number and email. That sounds simple, but not everyone does it.

Or the best customer service, like Ritz Carlton. They have one of the highest J.D. Power rankings for guest satisfaction. And have received numerous hospitality industry awards. It starts in the hiring process. Their turnover rate is about a third what the average turnover rate is in their industry. Ritz Carlton is very picky about who they hire. Once they are hired, employees go through about 250 hours of personal development training each year. And then each employee is given the trust that they will create memorable experiences for customers. Ritz Carlton sets the gold standard for customer service and uses it as their ultimate competitive advantage.

Experience in technology that others don’t have. Like Amazon who gains a competitive advantage through efficiency in the collection, storage, and analytics of their customers’ information. Systems that link customer and supplier offer an opportunity for competitive advantage.

Or a bigger or better distribution network. Like Coca-cola. Distribution is a big part of their competitive advantage. You can find Coke nearly everywhere in the world. They are considered the largest non-alcoholic beverage company in the world. They reach consumers in more than 200 countries and produce around 500 beverages. The company’s business model is the key to their success. They generate revenue by selling concentrates and syrups to bottling facilities globally. They also sell finished products to retailers and other distributors.

Maybe they have strong intellectual property. As a patent and trade dress owner, my favorite competitive advantage is intellectual property. There’s no better way to keep your competition at bay than with intellectual property that literally keeps them off the market, at least for a set period of time. And some IP, like the kind I have on my wrist water bottle product, is for the life of the product. Google’s trademark is worth an estimated $44 billion. This makes it the most valuable trademark in the world. They are also one of the most innovative companies in the world. They’ve proven that innovation increases competitive advantage.

Companies that have cornered a niche market may obtain competitive advantage. This would include companies like Untuckit, casual men’s shirts that are meant to be worn untucked. Or Lefty’s, the store for left-handed people. Cornering a niche market means customers will think of you first when they’re looking for that specific product or service. You also have a much better chance of ranking high in search engines.

What is your competitive advantage?

You probably know who your competition is, and if you don’t, that’s the first thing you need to research. Not because you want to copy what they do. In fact, just the opposite. You want to make sure you stand out from the crowd. Go in the opposite direction they go in. Find your own originality.

But there is one competitor you’re probably not thinking about. Someone sitting in their basement with a computer, some creativity, and lots of time on their hands, could wipe your business out.

“Hey, do you know anybody who wants to buy a car? I’ve got a car to sell.” “Does anyone know anyone who needs a job? I’m looking to start hiring.

That’s how it started. And it grew, and grew, and grew. Craig eventually took that list and put it online. He quit his job to run it, and now Craig – and his list – are both worth over a billion dollars.

Now, anyone in the newspaper industry could have come up with that idea. But why would they? They were making millions of dollars. Some people in the industry said it was like printing money.

At the time Craig’s List came along, newspapers were charging an astronomical amount of money for ads because they had no competition. How could they have predicted someone giving away what they were charging a fortune for? How could they have predicted free classified ads? It happened so suddenly. They didn’t know what hit them. And they never recovered.

But – if they had been focused on innovating – any major newspaper could have developed (and profited from) this market themselves. Just think of the advantage a paper would have over its rivals, if it dominated the online ad market ahead of everyone else.

They would have the added revenue stream, and the customers interested in finding things online. As consumer preferences shifted to consuming other content from the newspaper online (news, articles, sports, etc.) – they’d already have the online customer base, and experience in site design, analytics, and more — far ahead of every other paper.

They could have given themselves a defense in advance to protect against the effects of disruption. But they didn’t.

Innovation can grow your competitive advantage when you embrace it.  Or destroy it and your business when you neglect it. The choice is yours.