Invention of the Elevator 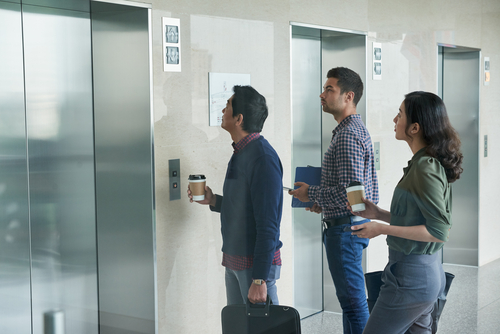 Invention of the Elevator

Some inventions seem modern, but were actually invented many years ago in a different form. That’s the case with the invention of the elevator. Prolific inventor Archimedes, came up with a primitive elevator that was operated by ropes and pulleys around 236 BC. It was operated by manpower, animals or water. They were used to lift building materials and water, but not people yet. That wouldn’t happen until about the first century AD. Gladiators and animals were lifted from one level to the next. They still didn’t have any safety devices on them. Elevators went from steam driven to hydraulic power and were used in mines, factories, and warehouses.

The name you see on most elevators today is Otis, which came from Elisha Graves Otis, an engineer, and founder of the Otis Elevator Company. He invented a safety device that keeps elevators from falling if the cable fails. Like most inventors, it wasn’t the only thing he invented. While working as a craftsman, he invented and patented a robot turner that could manufacture bed frames four times faster than could be done manually.

The next two inventions he started on were safety devices used to stop trains and an automatic bread baking machine. This didn’t work out because the water power he was using from the local stream was suddenly diverted by the city.

The invention career still had not taken off, and he needed money. So he got a job at a bed frame factory. One day while he was cleaning up, he needed to get some debris up to an upper level. The old elevator cables could break, so he started thinking of a way to make them safer. He added a safety braking device so if the cable broke, it would still hold up. Otis didn’t really think the idea would go anywhere. In fact, he thought so little of it that he didn’t even patent the idea. But he did start selling a few of them.

He decided to do a publicity stunt at the New York World’s Fair. As the crowd gathered to watch Otis rise up in the lift, he had someone cut the only rope holding the platform. It fell a few inches, but that was it. This gave people the confidence to ride in an Otis elevator. The Otis Brothers Company was formed and paved the way for modern skyscrapers around the world.