Inventor of the Shopping Cart 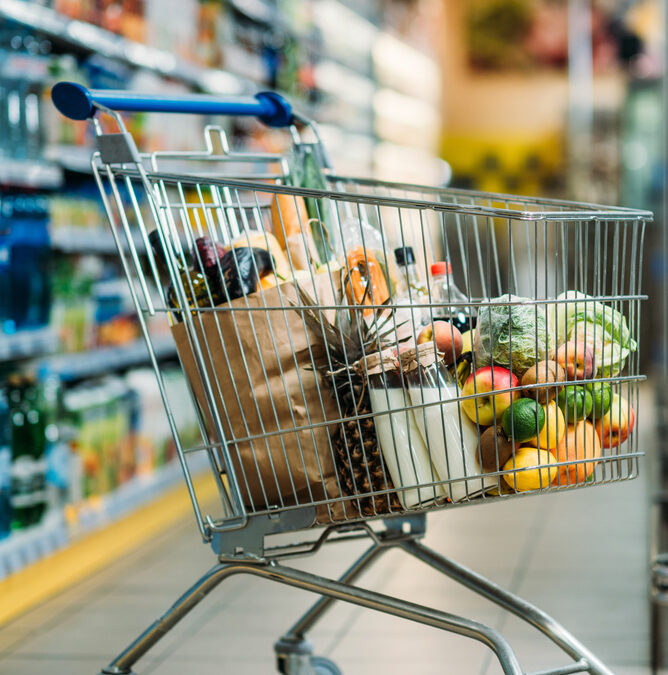 Smart businesses are always trying to figure out how to get their customers to buy more. So was the case with the inventor of the shopping cart, Sylvan Goldman. He was the owner of the Humpy Dumpty supermarket chain in Oklahoma City. The struggling supermarket chain was purchased by Goldman at the height of the Great Depression.

Just like my grandmother, he went into the business because, as he said, “The wonderful thing about food from our point of view is that everybody uses it–and uses it only once.” My grandmother also had a gas station because people had to fill up their cars. And they had to do it every week.

Until post World War I there were few changes in food distribution. In the next decade the retail food industry grew tremendously. Chain grocery stores, self service, and more choices for consumers. Goldman got in at the beginning of these changes and profited from them through his innovation.

Goldman was always an innovator. He didn’t like following the crowd and chose to do things his own way. One thing he did that no one else was doing was contests. In one contest he gave $150 in prizes to the winning slogans stating why the Sun Stores’ policy of “no delivery” meant money saved to customers. He was trying to get them to warm up to the idea of self-serve grocery shopping instead of having groceries delivered. During the Great Depression, he hired kids on bikes to deliver groceries because many people couldn’t even afford to drive their cars. With services like Instacart and fresh milk delivery we are truly going back to the old way of doing things. If you want to find a good idea, go back in history. This is one of many concepts I teach about innovation as an innovation keynote speaker.

Inventor of the shopping cart

One practice that should be done by all business owners is to monitor how your customers do business with you. How do they shop or spend money? What products and services do they prefer? Goldman used to study his customers.

He watched as his customers struggled with their groceries, which they carried in a wire and wicker basket. When the baskets would get too full the customers would stop shopping. He knew there had to be a better way to keep his customers buying more. His first solution was to get clerks to approach customers and ask if they could hold their baskets at the front while he gave them a second basket to use.

Inventor of the shopping cart

His inspiration for the new shopping cart came from a folding chair that he had in his office. The design was to put two wire baskets together, stacked one on top of the other. Then he put them in a metal frame with wheels at the base. When not in use the frame would fold flat like the chair he designed them after. The shopping carts were called folding basket carriers. The folding basket carrier was patented in 1940.

Sylvan Goldman was also an innovator in the self-serve grocery store concept, though he wasn’t the first. That was Clarence Saunders. He opened the first self-serve grocery store in 1916 in Memphis, Tennessee. Before we had grocery stores people shopped for groceries in specialty stores. A butcher shop for meat, bakery for bread, and pharmacy for non-food items. In the 1800s general stores began popping up where people could buy different kinds of things in the same store. This is what my grandmother had when I was a kid. A clerk would measure out the amount the customer needed, much like my grandmother would slice cheese and meat for them. But she also sold canned goods, dairy products, and household items and most of the store was self serve.

Saunders’ store had four aisles where customers could view over 600 items and pick them themselves. Just like most innovations, people were used to the old way of having clerks.  And they thought that getting their own groceries was demeaning. It took a lot of convincing to get customers to adjust to a new way of shopping. This is how it is with most new innovations. People are stuck in the old way of thinking. They usually have to be convinced to try something new and innovative.

Sylvan Goldman had the same problem with his original grocery shopping cart. The idea didn’t catch on right away. Men thought the baskets were too effeminate. They didn’t want to seem like they weren’t strong enough to carry all of the items. And the women thought they looked too much like baby carriages. So he hired some male and female models to walk around the store using them. And also had a greeter at the front of the store who could explain how to use them. They played into group think by saying “Everyone uses them”. He ran ads showing a tired female shopper struggling with an overflowing basket. The ad said “No more of this at your standard stores.” Pretty soon the idea caught on and shoppers were spending more money than ever in his stores.

The modern version of the shopping cart was invented by Orla Watson. This is the swinging door cart that allows it to be stacked for space. Goldman patented a similar version of that cart that was known as the “nest cart” over a year after Watson filed for his patent. There was an infringement suit brought against him. In the end, Goldman paid one dollar in counterfeit damages. In exchange for this he was granted an exclusive operating license. As an inventor who has battled counterfeiters and deals with licensing for my own product, this sounds crazy. But there had to be some reason he chose to make that kind of deal.

In 1950 the federal government filed a lawsuit against Watson’s company, Telescope Carts, Inc. This led to an agreement that made sure the license to Goldman be expanded to all manufacturers. This continued until the patent ran out.

Child seats were added to grocery store shopping carts in the 1950’s. In 1967 retractable seat blets were added for extra security. Now there are even kiddy add-on carts and tiny kids carts that they can push themselves.

Goldman made multi-millions as the inventor of the shopping cart. He also invented the carts you see at airports called bag carts. Companies like Smarte Carte charge a fee to use them, but are life savers for travelers with a lot of luggage.

Goldman served as president of the Super Market Institute and vice-president of the National Association of Food Chains and of the International Food Congress. He continued to spread his innovative ideas through his leadership. Goldman gave his time and money to many philanthropic causes in his lifetime.

The inventor of the shopping cart ended up with a fortune of over $400 million upon his death. He collected royalties on every shopping cart sold until his patent ran out. ( Like I always say “Licensing intellectual property is like selling air”). Not bad for a man who never made it past the eighth grade!