The Role of Serendipity in Innovation 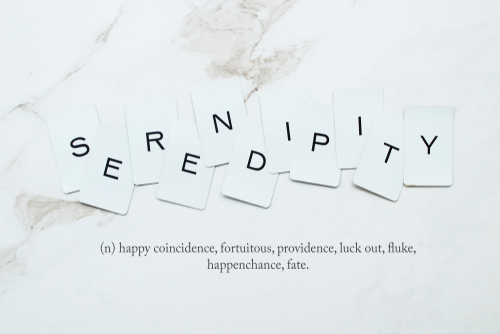 I often speak about the role of serendipity in innovation as an innovation keynote speaker. Many products inventors come up with are “happy accidents”, a word coined by English writer Horace Walpole in 1754. In the fairy tale “The Three Princes of Serendip”, the king sent his 3 sons out into the world, fearing they were becoming too privileged. They returned with new adventures they never would have had if they had been locked up in the castle.

Get Out of Your Comfort Zone

I remind audiences that you have to get out of your comfort zone in order to find serendipity. The more you remain stuck in your day to day rut, the less likely you will be to have new experiences. Serendipity is finding things you’re not looking for.

A good example of this is the invention of velcro. George de Mestral was hunting in the mountains with his dog when he became annoyed with some cockle-burs that were stuck to his pants and his dog’s fur. When he got home he examined the cockle-burs under a microscope to see how they attached themselves.

He discovered the hooks on the plant attach to the threads on your clothing and decided he wanted to create a hook and loop type of fastener based on that system that would be better than a zipper. So, de Mestral wasn’t looking for a new innovation. It was a “happy accident” that ended up making him a lot of money and improving the clothing industry.

Invention of the Popsicle

Another example of serendipity in innovation is the popsicle. It was accidently invented  in 1905 by an 11 year old boy, Frank Epperson who mixed soda powder with water and left it out on the windowsill overnight with the stirrer still in the container.  The temperatures that night were below freezing. The next morning, he found the stick embedded in the frozen concoction and, being the curious kid he was, wondered what it might taste like. Turns out it tasted pretty good.

He took some of his new treats to school and they were a big hit with the other kids. When he had kids of his own, they also loved the treat, calling them “Pop’s sicle”. Epperson applied for a patent on them in 1023 and the name Popsicle stuck.

Serendipity can also occur when the innovation is different than what the innovator planned. A good example of this is the Post It note. Spencer Silver was working in his lab at 3-M trying to discover a very strong adhesive. Instead of finding something strong, he actually discovered an adhesive that was very weak. It would stick to things, but was easy to peel off without damaging the item.

Years later, another 3-M employee was singing in the church choir, trying to use markers to keep his place in the hymnal. But they kept falling out. Then he remembered the super weak adhesive that was sitting around at 3-M, which had been invented by accident. He wondered if that would work on the markers, and it turned out to be the perfect solution. It would take 3-M 10 years to get the new product, now called Post-it notes, to market nationally.

Inventors and innovators are open to the possibilities that serendipity will bring them. If you want to be more serendipitous, accept invitations to as many social events as you can handle. Be open to connecting with people you normally wouldn’t hang out with. Travel is a great way to increase your chances of discovering something innovative. The further away you can get from your normal daily rut, the better. Travel to new cities, new states, new countries. And open yourself up to making a new discovery through serendipity.