Why Are There So Few Women Inventors? 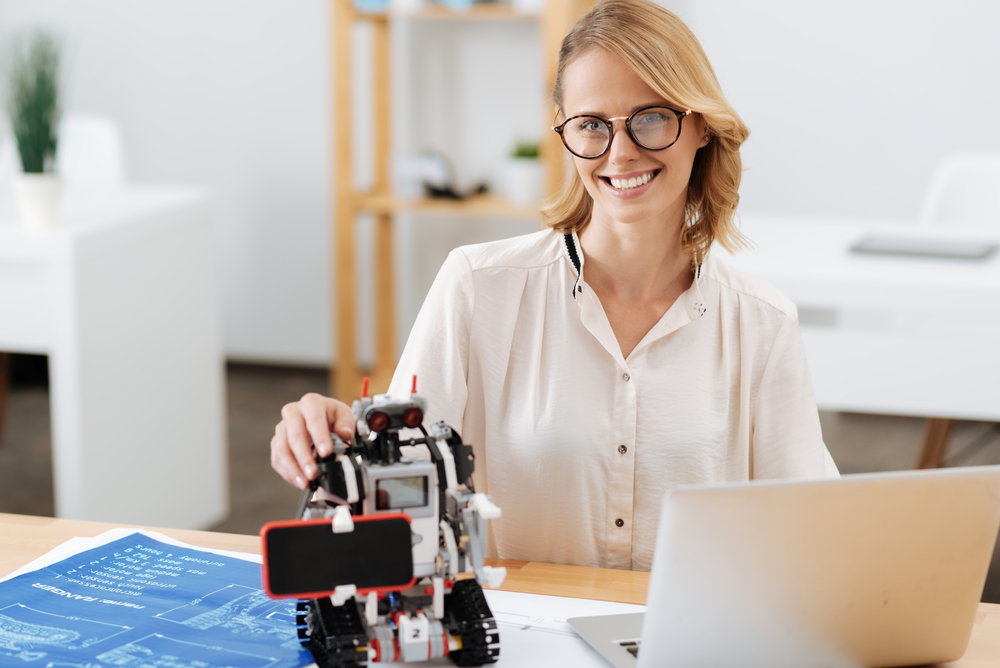 As a woman inventor, I love being able to encourage other women to invent. Fewer than 15% of all women in the world are inventors. At least that’s better than 1977 when only 3% of women even had their name on a patent. Even fewer, around 4%, are sole patent owners like myself. Women inventors hold fewer than a quarter of US biomedical patents.

There’s no reason women can’t invent and we have as much of a level playing field as male inventors. That’s one thing I like about it. I also think women may have even more potential to be inventors. Sure, men greatly outnumber women in STEM research. But that’s an excuse. You don’t have to be a scientist or engineer to be an inventor. I never even went to college. Hedy Lamar, who invented the technology we use for GPS and Wi-Fi never went to college either. In fact, she dropped out of high school.

My dad invented a part that goes on the grocery scanner. So when I showed an interest in inventing he didn’t think it was weird. When I was a teenager I came up with an invention that went on to make someone else rich. I didn’t have the money or resources to do it at the time. I swore that would never happen again.

So when I did have another really good commercial idea I decided that nothing was going to stop me.

Passing out from dehydration

I came up with the idea for my own invention while I was out running in the summer heat. I was carrying my music and keys, but didn’t have a spare hand to carry a water bottle. Because of that I passed out on a country road. Luckily a friendly person came by and took me to the hospital. While I was there hooked up to an IV I was thinking out stupid it was to run without bringing water with me. I looked down at my wrist and thought “I wonder if I could put a water bottle on my wrist?” That’s when I came up with the idea for the wrist water bottle. I thought for sure that someone else must have come up with the idea before. But after doing lots of research I realized no one had, surprisingly.

So, I got to work making a crude prototype out of clay. Then I took it to a mold maker who turned my idea into reality. After that I had to figure out how to make a band and get a cap made. It seems pretty simple, but inventing is never quite as simple as it looks. When I finally had the whole product put together I had to find packaging. I found a manufacturer at a trade show and ordered 50,000 of them without having a clue how I was going to sell them. I now have 25 distributors around the world and was a NASDAQ semi-finalist. The product has been on The Today Show, HGTV, and on every news station in the US.

Necessity is the mother of invention and women inventors have been proving that for many years.

In 1715 we have the first documented evidence of a woman inventor in the US, Sybilla Masters. She came up with a new method for cleaning and curing corn. Sybilla watched as Native American women used heavy pestles to pound corn by hand. She wanted to come up with a power-driven method. It would be easier and more efficient. She had to go to England to apply for a patent because America was still a British colony. That’s when she found out that women couldn’t get a patent in their own name. At that time they were still considered to be the property of their husband and couldn’t own any property at all. So she put the patent in her husband’s name. The patent did give her credit for the idea, but she couldn’t own it in her name.

Women patent holders in the US

It would take a hundred years for women inventors to be recognized in a patent. Mary Dixon Kies became the first woman to get a patent in her name in the US. It was for an innovative way to weave straw with silk or thread. Her invention helped to boost the hat industry.

One thing I would say is that women aren’t typically encouraged to be inventors. I spoke about this as the keynote for the Procter and Gamble International Engineering Summit. Over 1,000 women engineers gathered for their international conference. I’m not an engineer and I learned a lot from them about what it’s like to be a woman in a typically man’s field. You don’t have to be a scientist or engineer to be an inventor, but it does help. Today there are more women entering the STEM fields, but that hasn’t always been the case.

According to the American Association of University Women “factors, like a lack of role models, cultures that tend to exclude women, and persistent stereotypes about women’s intellectual abilities, reinforce a wide gender gap”. Women are underestimated in STEM fields from an early age. I’ve also heard this from women engineers.

Women inventors also have these biases to overcome. I’ll never forget the day I got a call from some who saw my product in a store and said “Oh, a woman invented it”. Like that mattered. But it still does. So I would say that women inventors have some of the same obstacles.

Research from jobs board CWJobs claims that UK workers in STEM are at a loss when it comes to naming key role models in their industry. Yet, when it comes to attracting women into STEM, having a role model is crucial. Even those working in STEM already often struggle to recognize women in their field.

History is full of women in STEM who changed the world. But because men dominated for so long, they were able to shape history, while many women’s contributions were drowned out. This is also true for women inventors. Maybe that’s why the caller on the phone was so shocked to hear about a woman inventor. There simply aren’t a lot of us out there.

I think that’s part of the reason there are so few women inventors in the world. We have very few role models. I’ve never had a woman inventor role model. In fact, I can’t really think of any male inventors I knew growing up, except maybe my dad. He had an idea for part of the grocery scanner, but he wasn’t really an inventor himself. I started inventing before Shark Tank. I basically had to just figure everything out myself. Having a mentor or role model would have been helpful. I had no guidance at all. I just went totally on my intuition.

Of course women have been inventing for many years. But their inventions weren’t always given the same cultural recognition as men’s. Look at the countries in the world where women have only recently been given the right to vote. Some countries make it extremely difficult. How could a woman even dream of being an inventor when they can’t even do the simplest things we take for granted? After all, there was a time in the Western world when women couldn’t own property.

Not having any exposure to other women inventors in society doesn’t give us much to aspire to. When a culture, in general, has kept women out of the spotlight it’s less likely we will have more women wanting to follow in their footsteps. I’ve heard many times that culture issues are keeping women out of STEM and also one of the reasons they drop out.

The gender gap isn’t about women’s abilities. It’s mostly due to messages and societal expectations girls pick up on at a young age. When I ask an audience to name an inventor, it’s overwhelmingly always a man that they name. We have a certain idea of what an inventor looks like and should be. I think all inventors have a stereotype of being kooky and outliers. I would say for the most part that has some truth in it.

The Yale School of Management found that women’s patents were more likely to be rejected than men’s. I’m not sure what the reasoning is behind that. I know my own patent was rejected once. And my trade dress was rejected twice. But I never gave up. I just kept tweaking it and sending it back until it was accepted.

The sooner we get over certain stereotypes of women inventors the better off we will be.

Consequences of too few women innovators

According to a new study published in Science magazine, fewer women hold biomedical patents. This leads to a reduced number of patented technologies designed to address problems affecting women. I heard so often that women invent girly things. Maybe that’s true, but we need more women inventors who can address problems that affect women. Right now because most men invent medical products, health inventions have tended to focus more on the needs of men than women.

Women are 47 percent more likely to be injured in a car crash because crash test dummies are just smaller versions of the male anatomy. They were invented in the 1940s by the US Air Force for testing aircraft ejection seats.

There are subtle benefits to having more inventions by women inventors. They’re more likely to identify how existing treatments for non-sex-specific diseases like heart attacks, diabetes, and stroke can be improved and adapted for the needs of women. They are also more likely to test whether a drug has more adverse side effects in women than in men.

According to McKinsey, 84% of CEOs say that the future success of their company is dependent on innovation. They need to stay ahead of the curve and create their ultimate competitive advantage.

I hope by now I’ve conveyed my passion for innovation. And innovation is, by definition, change. Maybe that’s why some individuals and businesses resist it.

But like it or not, all industries and companies will change. If they don’t change themselves, they will be subjected to outside forces that will change them. And most businesses and people don’t want to change until they are forced to.

Disruption is coming, and you also know that you’re going to have to innovate and change the way you do business in order to survive it.

As a motivational speaker on the topic of disruptive innovation, I’ve been in front of many audiences who don’t believe that they need to innovate and change. They’re hanging on to the hope that since their company or industry has run successfully for some extended period, that somehow they are immune — and their inclination is to leave things as they are.

As a futurist, I try to loudly sound the warning: disruption is coming. It’s inevitable. And you’d better be prepared for it. It’s been happening since the first business owner hung out their shingle. No industry is safe from it. But when an industry enjoys a long period without disruption, it can be lulled into complacency.

Increasing exposure to innovation and inventing among women is incredibly important. As an innovation keynote speaker, I love having the opportunity to encourage that in my job as an innovation speaker. Innovation is the engine of economic growth. And the world needs more women inventors to change the world. A recent study has shown that based on growth it will take another 118 years for the US to reach gender parity when it comes to women inventors. If that’s true I certainly have my work cut out for me!