Women in the Food Science Industry 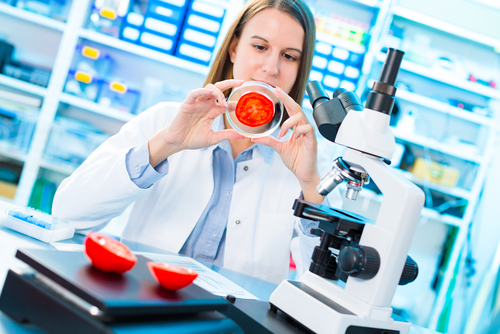 I spend a lot of my career as an innovation keynote speaker speaking to scientists and engineers. The audiences are already creative and innovate. So I don’t have to explain how important creativity is, they are already practicing it every day. Though many STEM careers are hungry for women to join, women in the food science industry are already there. In fact, almost half of the membership of the Institute of Food Technologists is women, and 70% of food science majors are women.

“In today’s food industry, there are more opportunities for women to advance, but the salary gap continues,” says Sharrann Simmons, senior business manager for Nagase America Corp. “Women need to take more risks and be prepared to take on projects and tasks outside their comfort zone to achieve greater responsibility.”

Here are four women in the food science industry who have made a mark and impacted the lives of Americans, according to the USDA:

Hyun Lillehoj is a molecular biologist at the ARS Animal Biosciences and Biotechnology Laboratory in Beltsville, MD. She is one of the world’s premier leaders in the field of avian immunology. She conducts research that has advanced the understanding of immunological responses in poultry to the pathogens Eimeria and Clostridium. These cost the U.S. poultry industry a combined $10 billion in losses annually.

Her research also focuses on developing alternatives to antibiotic use—integrating nutrition, health, and disease research. These are to protect commercial chickens from important avian diseases. Lillehoj has been working with colleagues in the agency and around the world to find ways of strengthening the poultry immune system with dietary supplements. She was one of several researchers to collaborate on the first study that assessed the use of green tea to improve poultry health.

Lillehoj evaluated the effects of adding commercial probiotics to poultry diets to benefit their immune system. She was awarded the Federal Laboratory Consortium (FLC) Award for Excellence in Technology Transfer for her work on developing and transferring immunological reagents and coccidial vaccine delivery technologies. In 2014, Lillehoj was inducted into the ARS Hall of Fame.

In 2015 she was honored at the 14th annual Samuel J. Heyman Service to America Medals awards in Washington, D.C. where she was presented with a Career Achievement Medal for her groundbreaking scientific discoveries for strategies to improve poultry health.

Soheila Maleki, a chemist at the Food Processing and Sensory Quality Research Unit in New Orleans, LA. She was named a 2018 finalist for a Samuel J. Heyman Service to America Medal. It recognizes Federal employees for outstanding achievement in making our nation safer, stronger, and healthier. She was recognized for her pioneering research to improve the quality of life for millions of Americans who suffer from food allergies. Particularly from peanuts.

Maleki’s groundbreaking research changed how people are tested for peanut allergies today and showed that food processing methods can also affect the allergic potential of food. Maleki co-authored research on preempting peanut allergies in at-risk infants. It prompted the American Medical Association to revise its guidelines on managing and diagnosing food allergies.

Maleki has been a member for the Scientific Advisory Council to the National Peanut Board Food Allergy Education and Advisory Council. She has served on this committee for 20 years. Maleki has contributed to the improvement of detection kits for food companies to assess cross contamination of allergens on product lines.

Maleki’s research has helped characterize the very first food (peanut) to ever be developed as a pharmaceutical. In 2019, she served as a member of the Food and Drug Administration Allergen Product Advisory Panel on peanut allergen powder to help reduce allergic reactions to peanuts.

Tara McHugh is a food technologist and director of the Western Regional Research Center in Albany, CA. In 2019, she was named the ARS Distinguished Senior Research Scientist of the Year for outstanding contributions to food science and processing. Her research focuses on creating value-added products from fruits and vegetables deemed unmarketable but are otherwise safe and nutritious to eat. In the early 2000s, McHugh developed the world’s first all-fruit bar using a novel processing technology she and her team invented.

Each of these 100-percent fruit bars is made of unmarketable fruit that would normally be discarded. In 2001, the editors of Popular Science magazine chose McHugh’s work as one of the magazine’s 100 “Best of What’s New” awards. Her flavorful, nutritious wraps were selected from among thousands of products and technologies reviewed for the 14th annual competition. In addition, McHugh and her team found that incorporating natural essential oils helped to fight against E. coli, Salmonella, and Listeria.

The cutting-edge research efforts of McHugh and her team have led to the patenting, licensing, and commercialization of several new food products. This included the bars, wraps, and dehydrated vegetable and fruit snacks. This research supports small businesses and U.S. growers. It also reduces waste and increases consumption of healthy foods.

Allene Rosalind Jeanes (1906-1995) was an ARS chemist at the National Center for Agricultural Utilization Research, in Peoria, IL. She posthumously became a member of the National Inventors Hall of Fame in 2017. Jeanes studied how bacteria could produce polymers in corn, wheat, and wood. Her research led to the discovery of ways to mass-produce dextran. This is a type of polymer, for use as a blood volume “expander”. It helps sustain accident and trauma victims suffering from significant blood loss until they could get a transfusion.

The methods Jeanes developed led to commercial-scale production, and use of dextran during the Korean War and saved countless lives on the battlefield. Dextran is still in use today. She is also responsible for developing xanthan gum, a sugar synthesized by bacteria. Today, xanthan gum is widely used in products such as toothpaste, egg substitutes, ice cream, and some gluten-free foods. In 1962, Jeanes received the Federal Women’s Service Award from President Kennedy. She was also the first woman awarded the USDA Distinguished Service Award.

In the wake of the current COVID-19 crisis I have a new appreciation for my local grocery store. I think many people take it for granted that the foods we buy every week will just be there. But I’ve had to learn to be more creative with the foods that are still on the shelves. This has caused me to get out of my comfort zone and try some foods I normally wouldn’t eat. With so many women scientists entering the food industry, something tells me it will get much more creative.