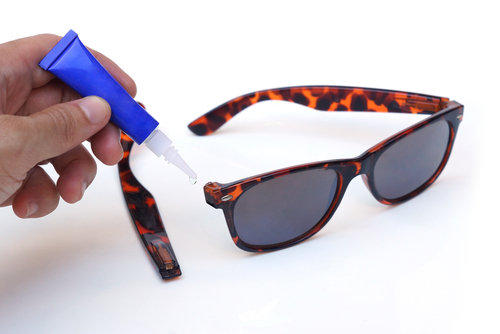 As an innovation keynote speaker and inventor I often talk about the “aha moment”. This is when it seems as though an idea just comes to you from out of the blue. But there are other ways inventions happen when you’re not looking for them. Many inventions were invented by accident. Here is an example of a product that was invented this way, an accidental innovation – Super Glue.

In 1942 Dr. Harry Coover set out to make clear plastic gun sights to be put on guns in World War 2. But the formula he was working on stuck to everything they touched and didn’t work well for gun sights. He did discover though that the formula was a great, quick bonding adhesive.

Since he didn’t really see a need at the time for the super strong glue, he abandoned the idea. It wasn’t until years later when he was an employee at the Eastman Kodak Company that the super strong bonding agent reared its head again.

He was working on a project to develop a heat resistant acrylate polymer for jet canopies when his co-worker put the glue between a pair of refractometer prisms. The costly prisms stuck solidly together. They realized the formula, which was now called Eastman 910, might actually have a commercial value. Eastman 910 was eventually rebranded under the name of Super Glue.

The super strong and quick bonding adhesive worked so well that it was eventually used in the Vietnam War in its spray form to stop bleeding in soldiers on the battlefield.

A square inch of Super Glue is so strong it can hold around one ton. According to the Super Glue website “In a public test of the product, The Original Super Glue® was able to bond a car to a crane. That moment has been immortalized on our packaging since the early days”.

Dr. Coover was a very prolific inventor with 460 patents, and was inducted into the Inventor’s Hall of Fame. He was also awarded the National Medal of Technology and Innovation.

Dr. Harry Coover is a good example of an inventor who took a failure and turned it into a success, an accidental innovation – Super Glue. Great innovators know that something that looks like a failure can be used for something else, whether it’s for a different product or even in another industry.

In the words of playwright Bertolt Brecht “Intelligence is not to make no mistakes. But quickly to see how to make them good.”