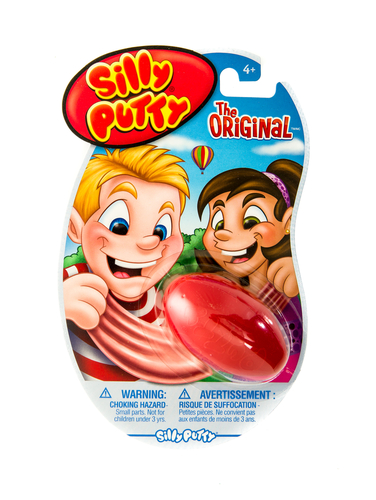 Some inventions were created because of a need in the marketplace or a need of the inventor. I invented the wrist water bottle because of my own need for hands-free hydration. But many inventions were the result of accidental innovation. This was the case with inventor and engineer James Gilbert E. Wright and the invention of Silly Putty.

The U.S. Government was looking for a synthetic rubber that they could use to make airplane tires, boots, gas masks and other military products during World War II. U.S. citizens were encouraged to make their rubber products last longer and rubber was rationed. The government approached several big companies to see if they could get their engineers to come up with something.

General Electric had a government contract to find an inexpensive substitute. Wright was an engineer at G.E. during that time. He had been working with silicone oil, and substituted silicon for carbon in the hopes of coming up with a new compound similar to rubber.

This is where the story sounds very similar to the accidental invention of Post It Notes. Dr. Spencer Silver was trying to invent a very strong adhesive, but instead invented a very weak one. The weak adhesive finally found a home in a product we still use every day – Post It Notes.

One day while Wright was working in the lab, he tested some boric acid in the formula. It didn’t quite work like he intended. The compound was still gooey. But when he threw it on the floor, to his amazement, it bounced. Not just a little, but it bounced 25 % higher than rubber. It could also be stretched. A cool toy to play with, but not the hard rubber substitute the military was looking for.

Then, like the Post It Note, someone found a use for it. Years later a toy store owner named Ruth Fallgatter saw the putty and contacted a toy marketer named Peter Hodgson. He came up with a clever way to package the new toy and put it in his catalog. Since it was close to Easter, he put some of the gooey material in Easter eggs. He sold around 250,000 after an article in the New Yorker came out featuring the novelty product. The rest is history. Or is it?

Like many inventions, the silicone concoction was claimed to be invented by two inventors. Earl Warrick, who was working at Dow Corning, independently came up with the same product at the same time. They both came up with the idea to add boric acid to silicone oil.

Millions of eggfuls of Silly Putty are sold every year, and over 300,000 have been sold since it’s inception. Not bad for an accidental innovation that was once deemed useless for it’s original intent. Now even astronauts have used Silly Putty in space to keep tools from floating away in zero gravity.

When the Korean War broke out Hodgson almost lost his business because silicone was on the list of items to be rationed. A year later the restriction was lifted and manufacturing started up again.

Hodgson originally marketed the product to adults, but it caught on with kids and soon that became the majority of his customers. He aired his first commercial for the putty during the Howdy Doody show.

After Hodgson’s death Binney & Smith took over the rights to the product. Silly Putty is now a registered trademark of Crayola, LLC. On May 28, 2001 it was inducted into the National Toy Hall of Fame.

The invention of Silly Putty almost ended up in the trash. But thanks to an observant inventor, it’s now a beloved novelty toy to millions of kids and adults around the world.