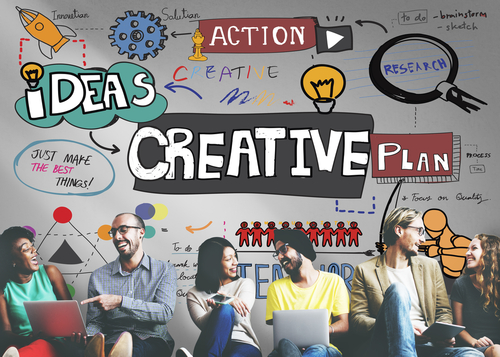 Baseball player Yogi Berra once said “If you don’t know where you’re going, you’ll end up someplace else”. You can’t expect your company and team to be innovative if you don’t know which direction you’re going in. It’s up to the person in charge to chart the course and relentlessly drive the mission with passion and commitment. It’s up to the person in charge to allow for some trial and error failure in order to grow an innovative company. You have to create an innovative culture.

Establish an inspiring and innovative vision that the members of your team can get behind and will also be passionate about achieving. The journey towards an innovative vision always involves change. And you know how much people like change! The vision has to be challenging, attainable and rewarding. It should seem like an adventure that everyone wants to go on together.

Innovation is trial and error

Innovation is a lot of trial and error, which means a LOT of failure. If you’re not failing, you are probably not innovating. A successful leader is not only okay with failure, they welcome it. That doesn’t mean big failures that costs the company a lot of money, but consistent failure and incremental innovation on a regular basis. Innovation is fraught with uncertainty, but you have to be okay with that and know that the end result will be worth it. The more times you strike out and learn from it, the closer you get to innovation success. Companies need to listen to their customers and create value that they are looking for.

Innovating ahead of the curve

One of the most common things I see people doing is to follow what others are doing thinking they are getting in on the latest trends. Once a trend is out there, it’s probably too late. The first person to come up with the idea has the competitive advantage. Leaders who wait until all of the data is in may end up following the sheep instead of innovating ahead of the curve.

When I was working in film development and production I had a boss who was into group think and following the crowd. Believe it or not, it’s not unusual in Hollywood. You would think that it should be a very creative place with unique ideas, but there is a lot of referential thinking going on.

I remember back when zombie movies suddenly became popular. My boss ran into my office and said “Find me a zombie movie!” Now, movies can take up to a year from pre production through post production, so we were already behind the eight ball. But he was adamant about putting out a zombie movie because everyone wanted to see them at that point.

So, I quickly found a zombie script and we got to work. Long story short, by the time we got the movie out the zombie craze had come and gone. The market was saturated and we had missed the curve.

Innovation is full of buzz words. People like to latch on to the latest academic sounding terms and have lengthy discussions about them. This all sounds impressive, but the bottom line is “what is your company doing about it?” Are you innovating or not? Does your company have an innovation plan? Do you create an innovative culture that starts at the top?

Being in the trenches I can tell you that most companies say they want to be innovative. The truth is that many just talk about it. Because innovation is cool. It’s a buzzword that usually gets thrown around, but rarely implemented.

How do I know? Because I like to follow up on companies who have hired me to speak on innovation to see how they’ve followed up. Many times I find that programs are slow to be implemented or they are sporadically implemented. Innovation isn’t something you do occasionally. It’s something that should be done on a daily basis.

Creativity is a muscle. If you don’t use it, you lose it. You must have an innovation plan and stick to it. You can give someone the innovation tools, but it’s up to them to use them on a regular basis.

There have been many studies out in the past few years that talk about how companies think they should be innovating and want to innovate, but aren’t.

A recent study from GE states that “60% of respondents say that the inability to generate disruptive ideas is killing their ability to innovate”.

“nearly two thirds of executives are convinced that businesses must encourage creative behaviors and disrupt their processes more often”.

AT&T is an example of a company that knows how to create an innovative culture. They get ideas from all departments from different people. It started in 2009 and is called The Innovation Pipeline.

What they do is what all companies should be doing. They treat everyone and their ideas the same whether they’ve worked for the company for a day or decades. It also doesn’t matter whether you are a janitor or the CEO. A good idea is a good idea. And those good ideas can come from anywhere. Thinking that only the executives at the top should be able to voice their ideas is a big mistake. You will be missing out on some of the best crowdsourcing if you don’t openly welcome all ideas. And until you put money behind something, ideas are free!

Once an idea gets approved by the committee it goes to the Angel Pitch, which gives employees the opportunity to pitch their ideas directly to executive leadership.

Over 50,000 ideas have come in and over 100 have been turned into real products and services that are being used by the company. It’s one of the largest corporate crowdsourcing innovation programs of its kind.

“You’ve probably used – or at least heard of – DriveMode, a mobile app that sends automated replies to people texting you while you’re on the road. It was a cornerstone of our It Can Wait campaign. The idea for that app originated from one of our AT&T call center employees who was personally affected by texting while driving. It’s just one of many innovations that have come through TIP that have cut costs, improved efficiencies, and enhanced the way we and our customers live, work and play.

TIP launched under John Donovan’s leadership when he headed the AT&T Technology Organization.

“I think it was successful in the beginning because people wanted to participate,” Donovan said. “But it sustained itself through the life of great ideas. Now it’s a community, and that community is where a lot of our innovation sits today.”

TIP was part of a broader transformation that AT&T embarked on a decade ago to democratize innovation, embrace open source, and accelerate the pace at which we brought impactful applications and services to market. AT&T Foundry also came out of this initiative. But TIP was unique in how it sparked a grassroots culture of creation. What started with a handful of people contributing has grown into a massive internal social network constantly coming up with ideas, providing feedback, and deciding whether those ideas should move on to receive funding.”

I like to teach innovation in such a way that anyone from a child to a rocket scientist could understand it. Make it too complicated and you suck all the fun out of it. And then guess what? People will stop wanting to do it.

Uncertainty isn’t a comfortable place. In fact, it triggers a flight or fight response in the amygdala part of the brain. And most people will choose flight. But innovators embrace uncertainty because we venture into uncharted territory every single day.

I was talking to a friend who made the decision to move to another state. She’s lived in the same place, in the same neighborhood, with the same friends, and the same job for 25 years. But after losing the job that seemed so stable, she was thrown a curve ball, and knew she was going to be forced to leave.

Most people don’t change unless they are literally forced to. And it usually takes something drastic to make them change. My friend said she is actually glad she lost the job and was forced to move, because otherwise she would have lingered in a bad situation forever. Sound familiar?

We are creatures of habit and tend to get into our comfortable routines. This is why ideas get stale. Innovation is all about getting out of those comfortable routines and embracing uncertainty, wherever it takes you. Whether it’s a new invention, new business idea, or to another state. If you want to be innovative, you have to shake things up constantly and willingly jump into the unknown with your mind and heart wide open.

When I do an innovation keynote speech, I usually drag people on stage to play some improv games. I have no idea what direction they’ll go in, and neither do they. But some brave volunteers like the challenge of uncertainty. They embrace it and welcome the chance to jump off the cliff.

That really is what innovation is about, because you have no idea if your ideas will be good or if anyone will like them. You have no idea if a new idea will sell or not. But you have to become comfortable with the uncomfortable if you want to create an innovative culture. Good innovators embrace uncertainty.