Will Robots Disrupt Your Job? 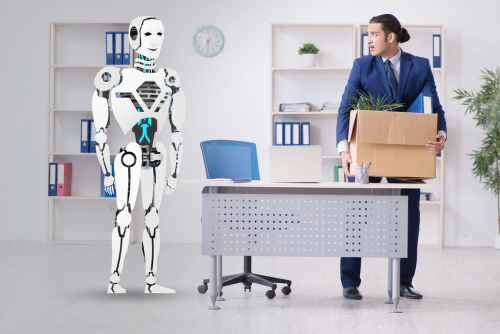 For years we’ve been reading about robots taking over our jobs and controlling human beings. In truth, we can learn to work alongside them. They can take over some of the more repetitious tasks we have to do. So, yes, robots may disrupt your job.

In the manufacturing industry about 60% of all manufacturing is already done by robots. As a manufacturer I’ve been welcoming that for years to help bring costs down. As with any robotics, some jobs will disappear, and some new ones will be created. Assembly line robots have replaced humans doing repetitive work.

With the help of technology like Robotic Processing Automation (or RPA), some robots can act like an extra worker. In Tesla’s factory, autonomous vehicles deliver goods to and from workstations without human assistance. They help the workers who select items and prepare them for shipping. This saves time where the pickers would normally have to walk to the loading dock from their station. The automated inventory systems helps to cut down on human error.

Robots are also showing up more in the healthcare industry. Again, they can take over mundane tasks that humans normally do, like carry meals and bed linens to patients. They’re currently being used to disinfect patient and operating rooms, reducing risks for patients and medical personnel. Like in the warehousing industry, they can transport lab samples and store them. This leaves more time for overworked medical staff to focus on more pressing responsibilities.

If you’ve ever been one of those patients who has a vein that’s hard to find when drawing blood, you can relax. The robotic lab assistant can locate the blood vessel and draw the blood with less pain and anxiety for the patient. They can also prepare and dispense medications in pharma labs.

Surgeons are using robots such as Intuitive’s da Vinci Surgical System for laparoscopy surgery that requires hyper-precise incisions. It has the ability to reach places in the body that would be difficult without robotic assistance. One day doctors located in other countries may be able to operate the equipment with the help of an assistant. This will cut down on costs.

The agriculture industry is quickly being disrupted by robots. They’re doing the time consuming and repetitive work I used to do as a child working on a farm, such as weeding and harvesting. This allows farmers to be more efficient and productive.

The world population is set to reach a record 9 billion by 2050 and will create an incredible demand for food. Solar powered autonimous drones are now using a precision camera system to spray weeds. This is a job that could easily be given to a robot and have human workers focused on other tasks.

Robots, like the Potting Robot, simply move large amounts of potted plants from one place in a nursery to another. They need to be gentle to avoid damaging the plants. But they save a lot of human hours that would have been spent moving plants from one area to another.

Most agricultural robots are designed to help farmers with crop growing. But some are being used to help livestock farmers with shepherding as well as monitoring their flock.

I never pictured robots working in construction, but they are. Just like other industries, they will still be working alongside humans for now as collaborative robots. They will lower construction costs by having the robots do busy work. 3-D printing robots will also change the construction industry.

SQ4D Inc., announced recently that its robotic construction system has built the largest permitted 3D-printed home in the world. It uses less than $6,000 in materials.

The Patchogue, N.Y.-based company’s Autonomous Robotic Construction System (ARCS) constructed a 1,900-square-foot home. it took 48 hours of print time over an eight-day period, the company said. It added that due to ARCS enhancements implemented post-construction, future print times are expected to be cut in half.

According to their press release:

“The platform robotically builds foundations, exterior walls, interior walls, utility conduits, and more, SQ4D said. The company said the digitally driven system can reduce labor to as little as three people. Labor costs account for up to 41% of the total construction cost of a home. The system’s low-power consumption technology also allows homes and buildings to be built using less energy than traditional construction methods, creating an environmentally friendly impact, the company added.”

“This revolutionary technology will be replacing and eliminating more expensive and inferior building materials, causing the printed structures to be stronger and safer,” the company said in a statement. “Utilizing concrete will reduce the cost by at least 30%, as well as making the structure more fire resistant than traditional methods. This home will have the strength to last into the next century.”

3D robotic printing will become part of the future of construction. It’s estimated to reach $190 million by 2025, according to a report by Infoholic Research. This also includes demolition robots, brick-laying robots and autonomous construction vehicles and equipment.

Robotics are also disrupting the retail industry. Grocery stores are using robots for tasks that they are suited for right now. They can look for spills, check inventory, clean floors or direct customers to the correct aisles.

Walmart started using a shopping robot called Alphabot in 2019 to speed up customers’ online orders. Alphabot works like the warehouse robots. It can roll along rails surrounding storage bins containing products and climb up the storage structures. When it finds the correct container, the robot removes it. Then it takes it to a human worker who picks out the correct item.

Marty is a bilingual grocery store robot made by Badger Technologies. He alerts shoppers to potential hazards in the store such as spills in the aisles. It’s being used by Stop and Shop and Giant grocery stores. It increases the safety of customers and lowers the risk of lawsuits from slip and falls.

Tally is another robot that checks for out of stock items and other merchandise issues like products being put in the wrong spot. It transmits it to employees every 30 minutes and uses more than 40 sensors to navigate the floor and scan shelves. Tally can check up to 30,000 products an hour as it audits inventory. It does this with the help of computer vision, cameras, and machine learning. It’s even sophisticated enough to identify product placement and special promotions. Tally is currently being used by Schnucks and Giant Eagle grocery stores.

Best Buy has collaborated with PaR Systems to introduce an automated system known as Chloe, who works 24/7 at their Manhattan location. Chloe controls a large vending machine system where customers can buy headphones, USB cords, chargers, etc. through a kiosk. You can also buy CDs, DVDs and games from the other kiosks in the store. This allows employees to help customers with more complex tech issues.

A robot name Mille is hard at work in the Australian retailer Woolworth stores. Like Marty, Mille can spot spills in the aisles and can also clean them up.

Robots change the way we work

Robots are radically changing how we work. They don’t get tired or bored or have issues with their co-workers. They don’t require overtime pay or health insurance.

Robots free up workers to perform other tasks, or can replace human workers in highly dangerous environments. Collaborative robots work with humans to make highly-precise tasks easier than every before.

The robotics industry continues to grow year after year. Even industries that seem impossible to automate are benefiting from advances in robotics technology.

In the future, it may be completely normal for robots to work alongside humans workers in all fields. Not replacing them, but lightening the burden of work.

I’ve always been afraid that I may someday see the Speakerbot2000 robot on a stage taking the job of a motivational speaker. So far this hasn’t happened!

Everyone in every industry needs to look to the future and be aware that technology could very likely take your job away or disrupt it in some way. But it’s more likely that robots will simply do the boring, repetitive jobs that people don’t want to do or don’t have time to do.