Invention of the Drive-in Theater 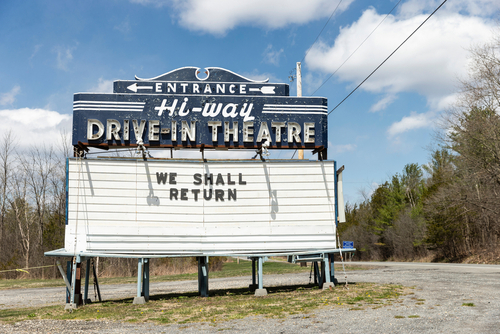 The drive-in movie theater concept was an old idea that has become a new idea during the Covid-19 pandemic. I always thought the idea was a good one, even with modern theaters and streaming. It’s novel and unique. People used to watch silent films at the beach or anywhere else they could put up a screen.

Invention of the drive-in theater

The idea has been around since the early 1900’s, but was officially patented by Richard Hollingshead in 1933. It was a case of necessity being the mother of invention, literally. He came up with the idea as a solution for people who couldn’t fit into the tiny theater seats and started by making a mini drive-in theater for his mother.

Hollingshead used this makeshift theater as his prototype and experimented with different projection and sound techniques. He put a Kodak projector on the hood of his car, mounted a screen, and put a radio behind the screen for sound.

After receiving his patent (#1,909,537) for the new concept, Hollingshead opened Park-In Theaters. The first movie that ran at the drive-in was a British comedy called “Wives Beware” and cost 25 cents per car. It didn’t have the modern sound system we know today, which is stereo speakers mounted to your window. They had what was called “directional sound.” Three main speakers provided sound and were mounted next to the screen.

The competitive advantages were touted in his advertising. People could smoke in their own cars, didn’t have to pay for parking, they could talk during the movie, and not have to pay for a babysitter.

Indoor movies theaters were only charged about $20 for a week to show a movie by the movie industry, but he was charged $400 for only 4 days. They were skeptical that the idea would work. This made it hard for him to stay in business.

One of the many drive-in movie locations failed to get licensing rights from Hollingshead and he filed a patent infringement suit against them.  But this kept happening to the invention of the drive-in theater. There were so many suits and countersuits that Hollingshead could barely keep up with the legal battles.

Hollingshead licensed the “drive in movie” concept to Loews Drive-in Theatres, Inc., but had trouble collecting royalty payments. He sued Loews for failure to pay royalties and patent infringement. This suit made it all the way to the First Circuit Court of Appeals.

The court ruled that the patent was invalid and should have never been granted in the first place because it was merely a copy of the layout of an indoor theater using cars instead of seats.

In 1949 his patent was overturned and drive-in theaters started opening everywhere. They especially increased after World War II and really became popular in the 1950s and 60s. At the time there were over 5,000 drive-in movie theaters around the country. They showed everything from B movies to the most current box office hits.

Innovation is constantly changing, and this also happened when Edward Brown, Jr. came up with a combination drive-in and fly-in theater. Small planes would taxi in to the last row, and be towed back to the airfield.