The Continuing Process of Invention 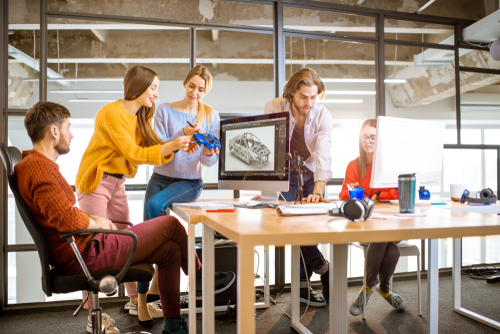 Inventors are problem solvers and are able to spot problems other people miss. This is why people will often say “Why didn’t I think of that?” The answer is that they would if they were able to think like an inventor and the process of invention to find those problems. Unfortunately the world will probably never run out of problems to solve.

If you look through history you’ll see the evolution of inventions that started off one way and were constantly innovated through the years. Many times an invention was ahead of its time and not yet practical to bring to market. A good example is the lightbulb.

Process of Invention of the Lightbulb

The invention of who invented the lightbulb, like many inventions, is complicated. Sometimes it’s that an invention isn’t ready for the market, or another version of the same idea simply caught on first or better.

So when Edison started working on the idea, he already had previous failures to guide him. That doesn’t mean he didn’t fail also. His first practical incandescent lighting system took about 3,000 experiments with a team of engineers to finally get a patent on the lightbulb that worked. But it was the bamboo burners called filaments, which could burn for up to 600 hours, that became a commercially viable product. It could light an entire city. This just goes to show how amazing it is that when we flip a switch we get instant light. Something we take for granted every day.

So, why is Edison the one who gets the credit for the lightbulb? Like PT Barnum, he was a great showman who knew how to work the media. In my opinion, he had a better publicist.

Another example is refrigeration. In the mid 1700’s chemist William Cullen was the first inventor to give a public demontrastion of artificial refrigeration. Using a pump he created a partial vacuum in a container of diethyl ether, then lowered its boiling point, and the diethyl ether boiled. The reaction absorbed heat from the surroundings, but it wasn’t practical for commercial use.

Many years later inventor Jacob Perkins was able to build a machine that used that principle, but he still wasn’t able to commercialize it. Eventually this led to industrial refrigeration and a model for home use in 1913.

Another example is the thermostat. We can thank inventor Andrew Ure for the fact that we have cool homes in the summer and warm homes in the winter. The bimetallic strip that was mentioned in his patent is still used today in modern thermostats.

Ure was the first to apply the principle to temperature comtrol, but the first person to use the bimettalic pendulum to compensate for inaccuracies caused by changes in temperature was inventor John Harrison. But this wasn’t the end of the thermostat invention process. Charles Edward Hearson invented a liquid thermostat that was designed for use in incubators for poultry.

And that still wasn’t the end of the thermostat innovation process. Through the continuing process of invention, W. M. Fulton invented another type of thermostat that used bellows filled with liquid or gas. It could be used to provide a gradual temperature change, like controlling the flow of gas in an oven.

Thanks to all of these inventors and the continuing process of invention we now use the themrostat in washing machines, dishwashers, refrigerators, freezers, ovens and in central heating.

“The history of photography began in remote antiquity with the discovery of two critical principles: camera obscura image projection. And the observation that some substances are visibly altered by exposure to light. There are no artifacts or descriptions that indicate any attempt to capture images with light sensitive materials prior to the 18th century (with the arguable exception of a possibly photographic process used to create the mysterious shroud of Turin).”

In the early 1700s Johann Heinrich Schulze proved that the darkening of silver salts was caused by light and not heat. He demonstrated the fact by using sunlight to record words on the salts. But that’s as far as he got.

Around 1800, Thomas Wedgwood and Humphry Davy (remember him?) made the first camera images in permanent form. But they also didn’t take it to a level where it could be used commercially.

Nicephore Niepce got it even closer by being able to fix an image that was captured by a camera, but it was still a rough version that wasn’t ready for primetime.

It wasn’t until Louis Daguerre developed the daguerreotype, that we finally had a commercially viable photographic process. It only needed minutes of exposure in the camera to produce what we have come to know as a photograph. Minutes of exposure turned into seconds with new materials.

British inventor William Henry Fox Talbot came up with his own photographic process called the “Calotype.” This method used sheets of high-quality photosensitive paper. These could easily be reproduced, and you could make endless copies of a picture from a single negative. This was a big step in photographic innovation.

The wet plate method invented by Frederick Scott Archer, was the next innovation in the process of invention for photography. Wet plates were used to document the Civil War in photographs. After that came the dry plate method, which was perfected by Robert L. Maddox.

It wasn’t until the mid 1880s that photography became accessible to amateurs. That’s when inventor George Eastman began producing film on rolls. The introduction of celluloid in the photography invention process would be the standard for almost a century.

Then in 1975 engineer and Eastman Kodak employee Steven Sasson, invented digital photography. I’m sure Daguerre couldn’t have imagined that you would eventually be able to carry around a camera in your back pocket. A camera that not only takes pictures, but sends texts and surfs the Internet.