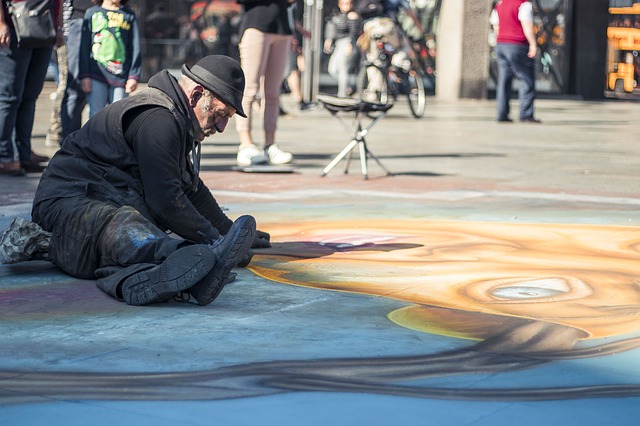 I love to hear stories like this, about a teenager who uses creativity to give homeless kids hope. Hope for Creativity was started by a teenager who recognizes how important creativity is, and that everyone should have access to the tools to make it possible. It doesn’t take much, but for those who are homeless, art supplies would be considered a luxury. Here is Moira Landry’s story:

It’s a familiar scene that plays out hundreds of times on the streets of any major city every day. But for Moira Landry, it was a brief but life-changing event.

About five years ago, she was on a weekend trip to New York City with her mother when a woman asked if they could spare a few dollars for lunch.

“I gave it to her,” said Moira’s mother, Melinda Hanlon. “Then Moira asked why she had so many bags. And I said, ‘Well, she probably carries everything she owns.’ She kind of pondered on that and said, ‘I want to help those people.'”

Which was a very nice sentiment coming from a 9-year-old, but even her mother was surprised by what happened next.

Moira, now an eighth-grader at Swampscott Middle School, started her own nonprofit organization a few years ago called Hope for Creativity, which provides art supplies to homeless children across Massachusetts.

This is a serious endeavor. Hope for Creativity is incorporated as a Massachusetts nonprofit with a set of bylaws, a mission statement, a board of directors and a youth board of directors. She’s also currently working on registering the group as an official 501c(3).

So far, she and other volunteers have put together 309 art packs and delivered them to area shelters.

“I was really determined to make a difference because it made me really sad that people would have to do that,” Moira said. “I tried to make it my goal to make people happy and show them that someone cares.”

And she has supporters.

The group’s Facebook page has about 420 fans, even some from places outside the U.S. A fundraiser this past year — the Music-a-thon! — raised upward of $3,000. And a youth board of directors made up of North Shore kids typically meets once a month.

“Our community is amazing,” Hanlon said. “They’ve really respected her and taken her seriously.”

Then, there’s the governor.

Moira was picked to represent Swampscott as one of 351 eighth-graders across Massachusetts — one from every community — during state inaugural events next month.

On Jan. 8, Moira will take part in a youth town meeting where she’ll meet Gov. Deval Patrick, before the young volunteers spread out across the area to take part in community service activities.

Appropriately, the youth town meeting will be held at Cradles to Crayons, a Quincy nonprofit that assists homeless families. That’s where Moira first began regularly volunteering shortly after that New York City trip as a 9-year-old.

Now, Moira spends much of her time in elementary schools, teaching even younger students about homelessness and how to help.

She hopes to expand Hope for Creativity over the next year, striving to hit the 500th art pack delivered. She estimates that she typically spends between two and four hours a day planning or attending events.

“This is her main thing,” her mother said. “This is what she does.”

Staff writer Chris Cassidy can be reached at ccassidy@salemnews.com and on Twitter @ChrisCassidy_SN.