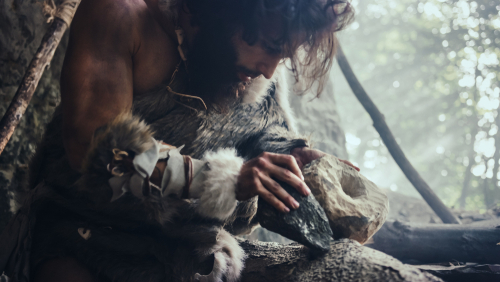 Creativity and innovation cover such a wide spectrum, it’s hard to say when it all actually started. Since the beginning of mankind we have had a propensity to come up with new ideas. And we’ve and constantly improve on existing ideas. The need to create is built into our DNA.

This didn’t happen overnight, but over thousands of years of evolution. The most dramatic burst of creativity occurred between 50,000 and 70,000 years ago with a sudden increase in brain size. Which was favored through natural selection. This brought about an increase in more complex tools and art. It’s possible that a larger brain allowed for more memory capacity. Or more complicated pattern recognition, which is needed for innovation.

As population growth hit a critical mass, creativity and innovation began exploding since more people were generating more ideas. And connecting to each other, which also improved the chances of coming up with great ideas. The more ideas you are exposed to from more sources, the more chances you have of combining ideas. And improving existing ideas to generate new and innovative ones. Today we would call that crowdsourcing. The practice of engaging the collective wisdom of a group in order to solve problems.

Population growth wasn’t the only reason creativity and innovation progressed. It was just one factor, along with social and biological changes.

As an inventor who speaks on inventing and innovation, I usually get at least one person who says that everything that could be invented has been invented. That’s not even close to the truth. We haven’t yet scratched the surface of innovation. With the invention of so many devices that keep more people than ever connected and sharing ideas, I predict a new explosion of innovation in the coming years. We can’t even imagine now exactly what the future holds. But it will be interesting.